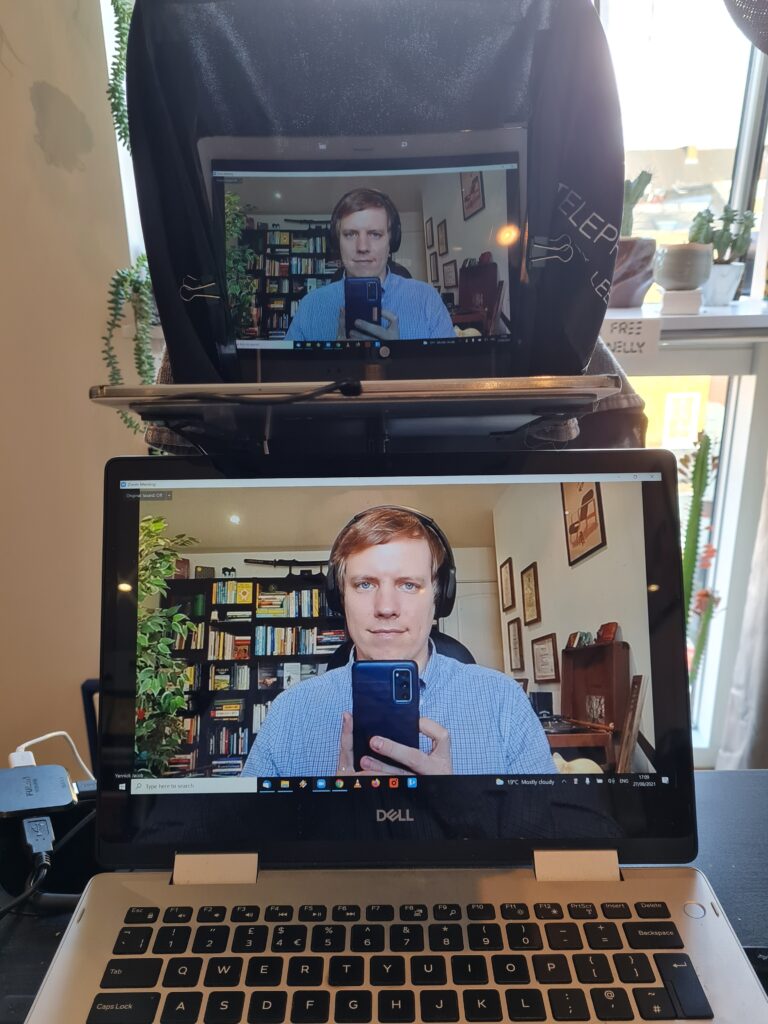 For years I’ve been using Zoom, and since last March (2020 – the pandemic year) I’ve been seeing all of my clients online, most via video chat. Anybody who works with relationships will probably agree that being able to look someone directly in the eye is such an important element when we meet someone or sit with them through significant moments. This is one of the things I miss most about face2face work. And so for some time I’ve been thinking about and experimenting with ways to create eye contact with people on Zoom.

First I thought there must be Zoom laptops where the camera sits behind the screen rather than just above it. But to no avail. Then I started buying (and returning) a few camera modules small enough to sit in front of the screen. But couldn’t find a small and good-enough lens at an affordable price without a fisheye or taking out half of the person’s face. It also looked pretty gnarly, and essentially I’d still either look at the camera or the person’s eye.

Then recently I spent a weekend in a film studio and for one of the bits I had a chance to play around with a teleprompter – something I never used before but had always been quite curious about. Turns out they’re pretty fun and if you write how you talk, or you just want check out some bullet points without taking your eyes of the camera, they’re just amazing! I also learned that they’re not actually screen, but merely a piece of glass that reflects whatever sits underneath! In this case it was an iPad. My brain started firing and a solution presented itself.

Now the only thing I need to figure out is how I can charge the tablet at the same time that I connect it as a 2nd monitor as not to run out of battery during a full day of coaching/meetings. I’ve tried an OTG USB hub, which was supposed to be the solution based on a number of videos, but it didn’t work. If you have an idea, I’d love to hear from you!

Also, I’d recommend two separate LED lights aimed at you from the front left and right instead of my massive ring light. I’ve also ordered a piece of glass to replace the cheap plastic that came with the teleprompter to get a clearer and brighter image.

If you ever try this or got some suggestions for improvement, do share!

View all posts by Yannick Jacob →