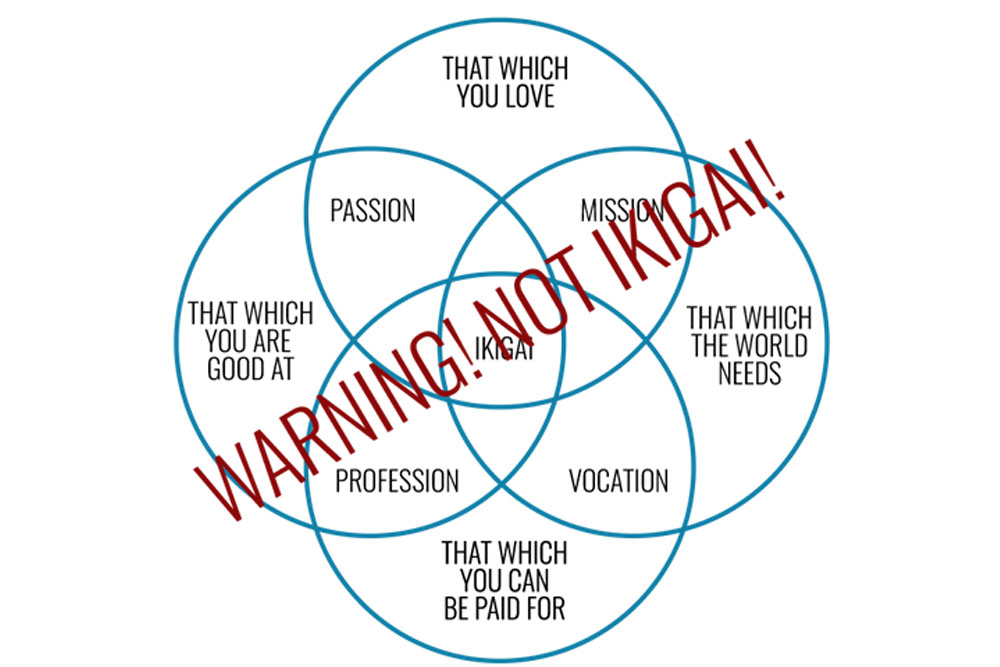 What burst another bubble?

Most of you will have heard of Ikigai, the Japanese concept that has often been translated as your “reason for getting up in the morning”, and beautifully depicted in a wonderful Venn diagram as a meeting point between what you love doing, what you’re good at, what the world needs and what you can get paid for.

In fact, it’s the only concept print that’s hanging on the wall of my consulting room as I’ve been referring to it so often I decided to create a poster and hang it up on the wall.

Well, fuck my luck! As it turns out that’s not Ikigai! Turns out that a chap called Andrés Zuzunaga had created (and published) this diagram, without the bit in the middle, as part of his research into purpose (and based on his astrology work with natal charts).

2 years later, along came Marc Winn and slapped an “Ikigai” into the centre, possibly misinterpreting Dan Buettner’s TED talk on How to Live to 100+ in combination with having seen the purpose bit somewhere, put two and two (or rather 4 and 5) together and the diagram went viral!

Now this is not to take anything away from either the “The Zuzunaga Venn Diagram of Purpose” or from Ikigai (as beautifully described by Ken Mogi in his book and this podcast). It’s just that I’ll have to cover up the middle of my poster now and change a few presentations to correct the reference. I do like to be accurate and pay credit where credit is due.

Muchas gracias, Andrés. You’re purpose diagram smashed it out of the park! 🙂

View all posts by Yannick Jacob →